UPWARD Studios is a music studio in Melbourne, Australia. UPWARD studios provides a range of musical services and is led by the multi award winning composer and performer Robert Upward. Robert has won awards and nominations from APRA and AACTA. In addition to wining awards, Robert serves as a juror for the AACTA Awards and an advisor to APRA. You can rest assured that the professional team at UPWARD Studios are lead by a peer respected expert. UPWARD Studios work with a range of artists in all musical genres, and have an impressive portfolio of work with musicians from around the globe.

Shelley Segal has a long standing relationship with UPWARD Studios. Now based in LA, the Australian singer-songwriter is known as a great story teller through her songwriting. This has led to her being constantly in demand as a touring performer and she has also enjoyed great success on US College Radio, peaking at number 3. Robert, of UPWARD studios has produced and arranged her latest two EPs – ‘Strange Feeling’ and an as yet unnamed album about to be released.  Also in the pipeline is a new video to support the first single from Shelley’s latest album called ‘Somebody Like You’. Discussing his work with Segal, Robert said “Shelley is a real pleasure to work with and it’s always fantastic to bring her sound alive with amazing musicians, exploring arrangements to deliver her signature sound.” Robert continued “I’m very proud of the quality of he music of these two albums and loved producing and arranging work with not only Shelley, but also the great team around me at UPWARD Studios.”

Just like Shelley Segal, it you’re looking for a professional music studio to take your songs to the next level, Robert and the team are there for you. They’ll use their musical and industry knowledge and expertise to arrange, record and produce your music. It doesn’t matter if this is your first time behind the mic in a studio, or you’re a seasoned professional – they’ll work with you and ensure that your creative vision is not only met but exceeded. Other artists who have chosen UPWARD Studios include Slinkee Mix, Elise and the Vibe, and Maya. As a performing and producing artist himself, including as part of the electronic music act emaar, Robert has enjoyed chart success and fully understands the process of what is required in creating great music, from initial ideas through arranging, recording and producing to commercial hit. Put simply, you couldn’t be in more talented or experienced hands – UPWARD Studios will get you and your music where you want to be! 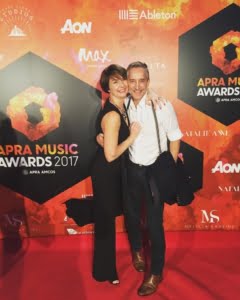 Robert is a well respected composer, particularly when it comes to music for film, television and advertising. Working collaboratively to your brief, or equally happy to provide initial creative vision, Robert will compose music that enhances and develops your story and the moods and emotions evoked. Whatever your film or TV series may be about, and whatever style of music is required, UPWARD Studios deliver scores of unmatchable quality – on time and on budget every time. Their existing portfolio of work in this area is impressive. Robert is regularly commissioned to write songs for TV series, including the ever popular Home and Away. He’s also composed the music for feature films including Fatal Honeymoon, and the feature documentary Molly, The Real Thing which tells the story of the iconic Australian Musical Figure Molly Meldrum. Robert’s awards for Music in film and TV include APRA/AGSC Screen Music Awards, Best Music in a Documentary – Nominee, Docklands, Network and AFI/AACTA Awards: Best Documentary Series – Nominee, Immigration Nation SBS and 7.

Looking for a songwriting partner?  Or are you a performer looking for some fantastic unique material? If your answer to either of these questions is yes, then UPWARD Studios can help you too. They have a team of writers and producers ready to produce outstanding music in any genre, and with their love of mentoring and artist development, don’t think that you aren’t ready for this service. Take advantage of the skill, expertise and experience of the UPWARD studios staff. With their proven track record of success in a number of genres, by working with UPWARD Studios, you’ll be making the best decision you possibly could to take your music to the next level. UPWARD work with TRUE Music and MUSHROOM Music publishing.

Music in advertising is another area of expertise for the team at UPWARD Studios. They understand exactly how to harness the emotional power of music and use this to your advantage when it comes to advertising. Great music for your ad campaigns will form strong connections with your customer base, and many major national and international brands have benefited from UPWARD Studios music. Most recently, Robert was nominated for the APRA Screen Music Awards, Best Music for an Advertisement 2016 for his song ‘It’s Got It All’ written for Country Racing’s advertisement of the same name.

UPWARD Studios provides a winning combination – state of the art facilities with award winning staff who are recognized by their peers as industry leaders. Song writing, recording and producing, music for TV and film, music for advertising; it’s all in a day’s work for the team at UPWARD, but that’s not where it stops. They are also experts in the world of vocal producing and recording. To produce a vocal recording is an art form in itself. The challenge is to capture those interesting aspects which make a singer’s voice special and unique, whilst still providing an excellent quality recording that’s production and release ready. The team at the studio will work with you, coaching and directing as necessary to make sure that you end up with the very best vocal recording possible.  If you have a voice over project that needs recording, then the expert team also await to share their expertise with you and you can be sure of a fantastic result every time. Whatever your musical needs, they wont be better met than when they’re delivered by UPWARD Studios.